After returning to the US, Billy tells Ross that he wants to finish the month out with the team and then retire to France to be with his girlfriend Sophia, and Ross accepts his decision. Later, Ross is forced to accept a mission from CIA Agent Mr. Church (Bruce Willis) to retrieve an item from a safe in an airplane that was shot down in Albania. Church sends technical expert Maggie (Yu Nan) with the team to crack the safe. In Albania, the team successfully retrieves the item, but are then ambushed by Jean Vilain (Jean-Claude Van Damme) and his mercenary group the Sangs, who have captured Billy. Vilain demands the Expendables weapons and the item in exchange for Billy's life. The team surrenders the item, but Vilain roundhouse kicks a knife through Billy's heart and flees with the Sangs by helicopter. Ross recovers a note for Sophia from Billy's body and the team buries their fallen comrade, swearing revenge on Vilain.

Maggie tells the team that the item is a computer containing a blueprint to the location of five tons of plutonium abandoned in a mine by the Soviet Union following the Cold War. Vilain and his right-hand man Hector (Scott Adkins) intend to retrieve the plutonium and sell it. The Expendables are able to partially track the blueprint computer's signal to follow Vilain. The team rest at an abandoned Russian military base overnight. The following morning, the team are ambushed by the Sangs and a tank. After the Expendables run out of ammunition, they are saved by Booker (Chuck Norris), Ross' old friend who quickly eliminates both the Sangs and the tank. Before he departs, Booker informs the group of a nearby village whose residents oppose Vilain. Meanwhile Hector and Vilain discover the plutonium and begin its collection.

Arriving at the village, the Expendables find several armed female villagers guarding their children from Vilain's forces: the local villages' inhabitants are taken by Vilain's forces and put to work in the mine as slaves, never returning. The women plead for the Expendables' help. The Sangs arrive to collect more villagers, but they are ambushed by the Expendables and killed. After locating Vilain and the mine, the team assault the area with their plane before purposefully crashing into the mine itself. The team manage to save the enslaved miners from execution, but Vilain and Hector escape with the plutonium. Vilain remotely detonates explosive charges in the mine, causing it to collapse and trap the Expendables and miners.

Trench and Church arrive and free the Expendables and miners. The pair then join with the Expendables to pursue Vilain. The group intercept Vilain and his men at an airport as he prepares to leave by plane. Joined again by Booker, the Expendables, Trench and Church engage the Sangs in battle. Christmas manages to decapitate Hector, while elsewhere Ross and Vilain fight their own, personal duel. Ross defeats Vilain, stabbing him and avenging Billy.

In the aftermath, Ross is provided with an old biplane by Church. Church, Maggie, Booker, and Trench then leave the team. In France, Sophia (Nikolette Noel) discovers a box on her doorstep containing a large sum of money and Billy's letter. As the Expendables depart in the plane, they give a final toast in honor of Billy.

The Score of the movie was composed by Brian Tyler. Many other pop songs were used in the movie and the trailer. 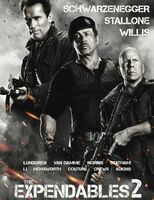 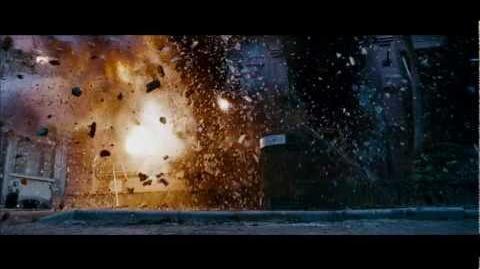