Edit
watch 01:40
The Sandman Will Keep You Awake - The Loop
Do you like this video?
Play Sound
[view] • [talk]

Sylvester Stallone is of Italian (father) and German and Breton French (mother) descent, and grew up in New York City. He has paralysis on one side of his face caused by complications in his birth which required doctors to use forceps. He was raised Catholic. His parents divorced when he was nine. He attended Lincoln High School in Philadelphia, and then went to Charlotte Hall Military Academy before going to attending Miami Dade College and the University of Miami. Which prior to the screen writer and director.

Stallone had his first acting job in a softcore porn flick titled The Party at Kitty and Sud's in 1970. He was paid $200 for it, and explained that he did it out of desperation. His career blew up with Rocky in 1976, which he both starred in and wrote. Throughout the 1970s and 1980s, Stallone became a well-known actor, especially for action films, considering his work in Rocky and Rambo. In more recent years, his work in Cop Land, the revisiting of Rocky and Rambo with sequels, and his work in The Expendables have helped him make a mainstream comeback, although his film hiatus in the early 2000s only lasted three years. 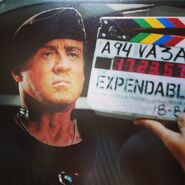 Winning an Oscar for 2015's Creed
Community content is available under CC-BY-SA unless otherwise noted.
Advertisement