Robert Davi is an acclaimed character actor perhaps best recognized for his appearances on TV shows such as NBC's procedural drama "Profiler" and "Stargate: Atlantis" and hit 80s films such as Die Hard (with Bruce Willis) where he played FBI agent Johnson, The Goonies where he played Jake Frateili and the James Bond villain Franz Sanchez in Licence to Kill. Other film credits include City Heat (with Clint Eastwood), Raw Deal (with Arnold Schwarzenegger), Action Jackson, Maniac Cop 2 (and it's final sequel), Predator 2 (with Henry Kingi), Cops and Robertsons, Showgirls, The Bad Pack, The Dukes, An American Carol (with Kelsey Grammer), The Butcher (with Eric Roberts), Game of Death (with Wesley Snipes and Gary Daniels), The Iceman and Blood of Redemption (with Dolph Lundgren).

Davi has has recurring roles on shows such as "St. Elsewhere", "Bay City Blues", "Wiseguy", "The Pretender" and "Criminal Minds" and has also guest starred on shows such as "The A-Team", "Hart to Hart", "T.J. Hooker", "Hunter", "The Equalizer", "L.A. Law" and "CSI". He also voiced the Spec Ops Leader in the Halo video game franchise.

He born in Astoria, Queens, New York, the son of Maria (née Rulli) and Sal Davi. His mother was an Italian American and his father was a native of Southern Italy; Davi spoke Italian during his childhood. He attended Seton Hall, a Catholic high school in Patchogue (Long Island), New York. He has two sisters, Yvonne Davi (deceased), and Michelle (Davi) Queal. He graduated from Hofstra University, the same alma mater as fellow James Bond villain Christopher Walken. Davi was drawn to Hofstra because of the school's Shakespearean "round" theatre.

He has also been in numerous B-movies and also makes a living on the side doing musical tours where he sings Sinatra. [1]

He plays Goran Vogner, a Mafia dealer in Albanian and the secondary antagonist in the third film helping Stonebanks to destroy The Expendables team. 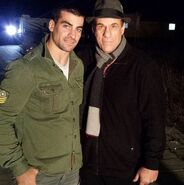 With Thomas Canestraro on-set.
Add a photo to this gallery
Retrieved from "https://expendables.fandom.com/wiki/Robert_Davi?oldid=18408"
Community content is available under CC-BY-SA unless otherwise noted.