Start a Wiki
[view] • [talk]
Mel Colm-Cille Gerard Gibson (born January 3, 1956) is an American actor, film director, producer and screenwriter who appeared in The Expendables 3. He was born in Peekskill, New York, moved with his parents to Sydney, Australia, when he was 12 years old, and later studied acting at the Australian National Institute of Dramatic Art.

Gibson is best known for his roles in films such as the Lethal Weapon and Mad Max franchises as well as Braveheart, Conspiracy Theory, The Patriot, Signs, We Were Soldiers, Edge of Darkness and The Beaver. In fall of 2013, he appeared in the cult movie sequel Machete Kills (with Danny Trejo and Antonio Banderas).

He played Conrad Stonebanks, the main antagonist of The Expendables 3.

In recent years, Gibson got public controversy for a racist phone call recording that was aimed at an ex-girlfriend of his. This ended up breaking many of his fan's hearts. 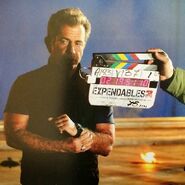 Add a photo to this gallery

Retrieved from "https://expendables.fandom.com/wiki/Mel_Gibson?oldid=18563"
Community content is available under CC-BY-SA unless otherwise noted.