Harrison Ford is an American actor best known for franchises such as the Star Wars, Indiana Jones and the Jack Ryan films (Patriot Games, Clear and Present Danger). He has starred in hit movies such as Witness, Presumed Innocent, Air Force One, Cowboys and Aliens, 42 and Blade Runner.

Expendables producer Avi Lerner had wishes to include him for the third instalment of this franchise and was later successful after the offer went through.

Ford is also considering starring in the new Star Wars trilogy for Disney and venturing into another Indiana Jones sequel as well. However, It was never even stated in the media ever since in 2008, whether the movies is on production or not.

He play Max Drummer of the new manger of The Expendables replacing Mr. Church to track down the Conrad Stonebanks and put an end to the Albania Drug Mafia's evil schemes in the third film. 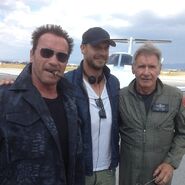 With the entire cast

Harrison Ford with Expendables 3 writing team Creighton Rothenberger and Katrin Benedikt
Add a photo to this gallery
Retrieved from "https://expendables.fandom.com/wiki/Harrison_Ford?oldid=16327"
Community content is available under CC-BY-SA unless otherwise noted.