Start a Wiki
[view] • [talk]
Dwayne "The Rock" Johnson is another wrestler-turned-action star who expressed interest in starring in the first sequel to Expendables. He is part-Samoan in terms of ethnicity and has made several Teen Choice award nominations and sexiest celeb magazine lists.

He has co-starred in mostly favourable summer movies, sometimes co-starring with the likes of Arnold Schwarzenegger, Eddie J. Fernandez and Bruce Willis.

He is also be best known for starring in films (often of the Action and Crime genre) such as such as Beyond the Mat, Longshot, The Mummy Returns, The Scorpion King, The Rundown, Walking Tall, Be Cool, Doom, Gridiron Gang, Reno 911!: Miami, Southland Tales, The Game Plan, Get Smart, Race to Witch Mountain, Planet 51, Tooth Fairy, Why Did I Get Married Too?, The Other Guys, You Again and Faster. In recent years, Johnson has become attached to the the Fast and Furious & G.I Joe franchises.

Johnson has expressed interest in portraying a villain in this sequel. 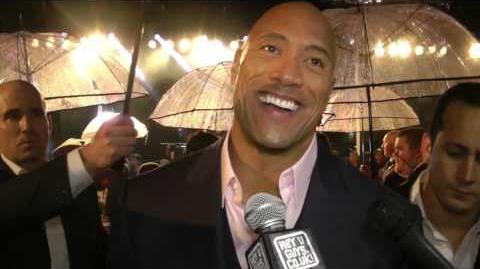 The Rock - The Expendables 3 reaction
Add a photo to this gallery
Retrieved from "https://expendables.fandom.com/wiki/Dwayne_%22The_Rock%22_Johnson?oldid=19065"
Community content is available under CC-BY-SA unless otherwise noted.