The Ducati Desmosedici RR is a limited production road-legal version of the Desmosedici MotoGP racebike. Ducati made 1,500 Desmosedici models for public purchase and it was launched at the 2006 Italian MotoGP event. It carries a price tag of $75,000 and has a top speed of +190 mph (305 km/h). This 989cc 4 cylinder produces 200hp while only weighing 377 pounds (171 kg). Only 500 made it to the U.S. and they all sold out within five hours. Actor Tom Cruise was the lucky recipient to receive the first one imported to the U.S.

In the 2010 film The Expendables, mercenary Lee Christmas (Jason Statham) rides this motorcycle. 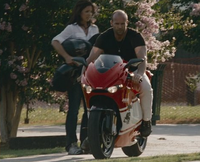 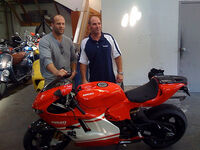 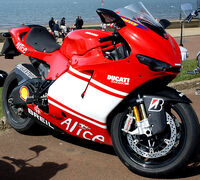 Retrieved from "https://expendables.fandom.com/wiki/Ducati_Desmosedici_RR?oldid=4580"
Community content is available under CC-BY-SA unless otherwise noted.